Researchers conduct a randomised evaluation to understand the economic effects of watching an aspirational video, as well as whether pairing the video with an unconditional cash transfers can improve the impact of cash.

Research has shown that people living in poverty may experience a range of psychological barriers that might constrain economic success. These barriers may include aspirations and goals that are lower than what could be achieved, a perception that their actions have limited impact on their circumstances, time-inconsistent preferences, as well as a lack of information about the potential for high-return investments.

Previous research suggests that it is possible to intervene to alleviate some of the psychological constraints of poverty. In other work, researchers have shown that interventions that shift aspirations (the way people think about their own future opportunities) can have long-term positive effects on their investments in their children’s education, in livestock and other assets, improved agricultural inputs, and on lifetime consumption. This evaluation, which tests a similar program, will identify whether a low-cost aspirations and goal-setting intervention delivered at a crucial decision point––when cash transfers are distributed––can enhance the economic returns to the cash transfer.

Other research focuses on barriers to investment that are more traditionally studied in economics. Some economists and policymakers argue that poor people live in economic environments where high-return investment opportunities exist that could facilitate exit from poverty.  For example, there may be high returns in rural areas from investments in livestock, non-farm enterprises, or human capital. However, people may face binding constraints against making these investments. Economists have often focused on credit constraints: poor people may be unable to fund high-return investments due to imperfect savings or borrowing markets, subsistence constraints on savings, or uninsurable risk. These arguments motivate many economic policies, including unconditional cash transfers, that provide poor people with temporary or once-off asset transfers that aim to facilitate high-return investments and change earnings trajectories.

This evaluation took place in parts of Homa Bay and Siaya counties in western Kenya among poor rural households. Researchers partnered with GiveDirectly, a nonprofit organization operating in East Africa that helps families living in extreme poverty by sending them unconditional cash transfers via mobile phone. GiveDirectly transfers funds to people in Kenya, Uganda, and Rwanda. Under GiveDirectly’s eligibility criteria, participants must be adults living in a rural area and who meet a location specific poverty criterion.

The experiment evaluates the effects of increases in wealth, reductions in psychological constraints, and the two together, on investment decisions, investment returns and economic welfare. Specifically, we cross-randomise a lump-sum US$2,237 PPP unconditional cash transfer with an intervention designed to boost aspirations and beliefs in one's abilities to achieve change and to encourage participants to set goals and work to achieve them. 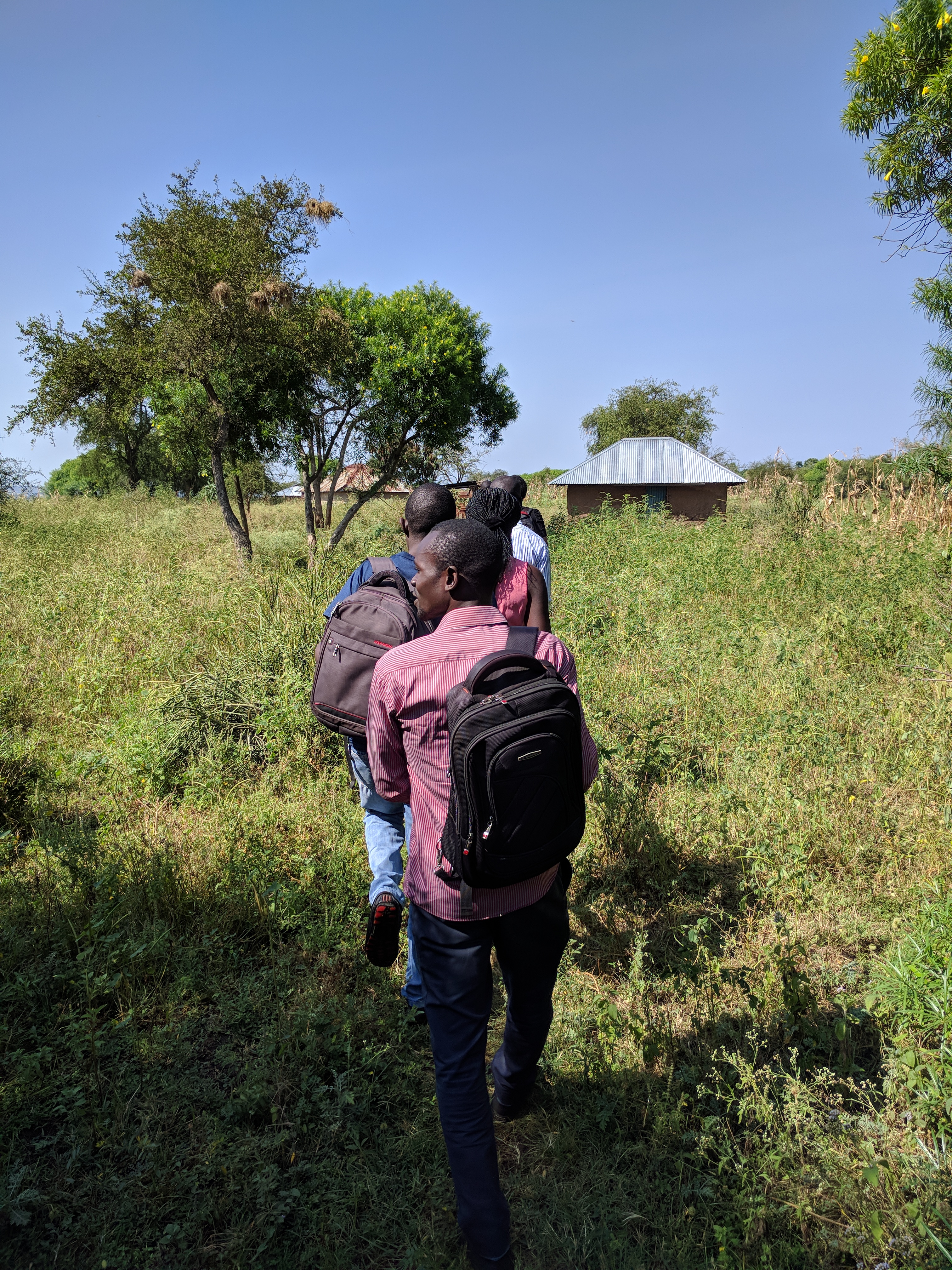 Four hundred and fifteen villages were randomly assigned to one of the following four groups:

Interventions were targeted at people who fulfilled GiveDirectly’s criteria to be eligible for the cash transfer. The interventions for each group is detailed below.

Aspirations and goal-setting intervention: Households participated in a group-based intervention consisting of three components that focus on aspirations and goal setting. In cash transfer villages, this program was conducted around the time that cash transfers are distributed. First, participants watched two back-to-back videos which narrate life stories of two role models with socio-economic backgrounds similar to the audience and model specific behaviours and mindsets. The videos described how the role models became successful, the obstacles they faced, and the lessons they drew from their experiences. The role models were also shown performing goal-setting exercises. Following the video, participants engaged in a hour-long facilitated goal-setting exercise where they imagined their lives in the next five years “if everything went as well as it possibly could.” They worked with discussion leaders to set clear and achievable goals, and to plan how to overcome obstacles. Finally, they also received a calendar depicting the movie role models, and stickers (to represent goals), which they were encouraged to put on the calendar as reminders of their goals. 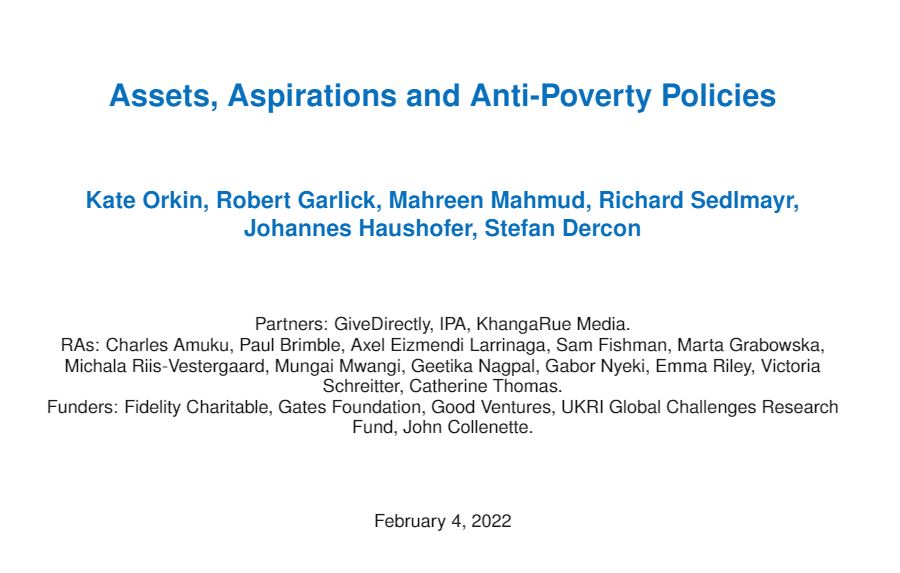 This policy report presents the preliminary results from the project: please contact Dr Kate Orkin <kate.orkin@bsg.ox.ac.uk> for updated results before citation or circulation. 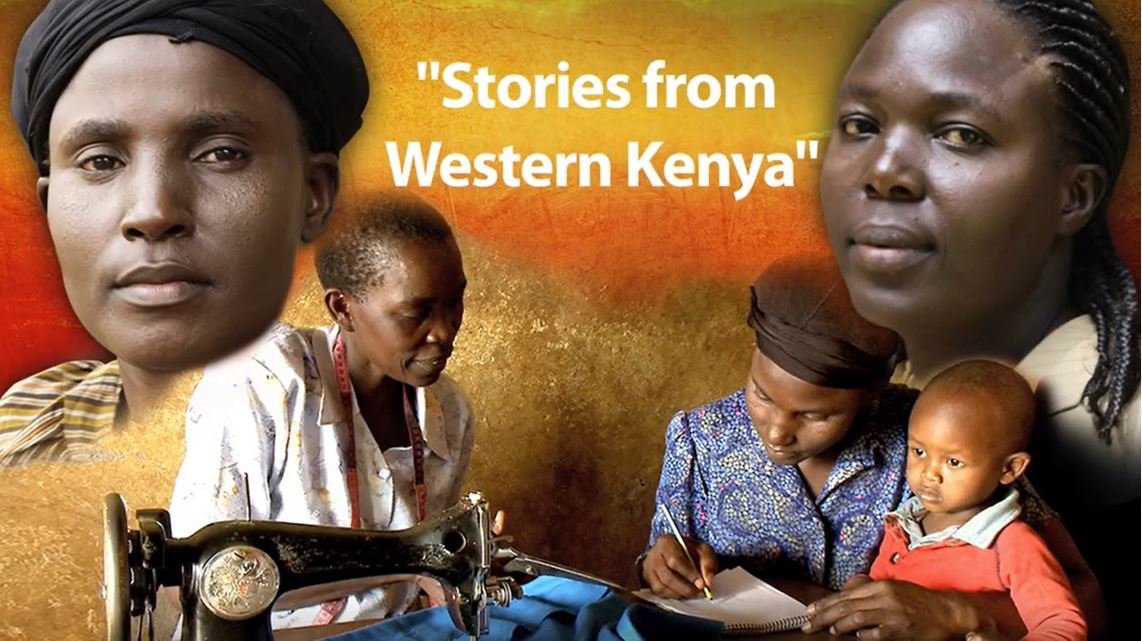 The video intervention used in this study includes a story about Judy and her goal to become a successful entrepreneur. Click on the link below to see her story.